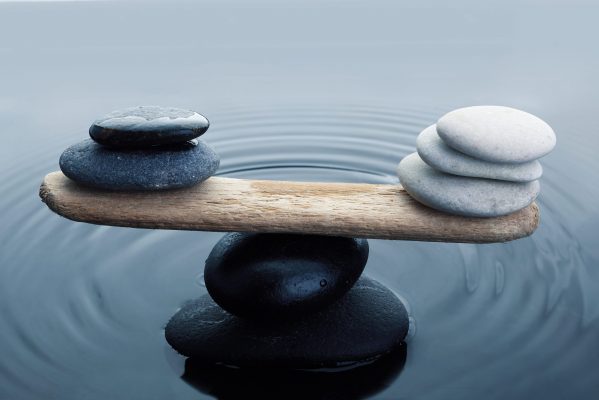 I always say that mineral balance is not a destination; it’s a proactive lifestyle strategy to support not only anti-aging and longevity, but to help repair and support the body’s foundation.  I constantly refer to it like you would a home with basement.  You need a strong foundation to make sure the house is stable and strong.  Without this, it literally could falter on unstable ground- leaving it to crumble.  Minerals are the foundation of health and with strong mineral status in the body, we can be in a position to ward off and protect ourselves, and our clients, against future issues.

First Round of HTMA Results – October 2020

I wanted to present this client case because it is a great reflection of what a good protocol can do for the balancing of minerals.  In this particular case, this client has an extremely high profile, high stress job.  She travels a lot for work and has some health concerns, including low energy, weight gain, GI distress, thyroid nodules, estrogen dominance, brain fog and low iron.  Her first test came back and a few things were noted, see below.

In this toxic elements chart, you can see there some higher levels showing; including arsenic, mercury, cadmium and aluminum.  Typically in a Slow Oxidizer (as this client is presenting), we do not normally see many metals as they may be deeply buried in tissues.  So, in this particular case we need to look at constant exposure to these toxic elements and as well the status of zinc and selenium. 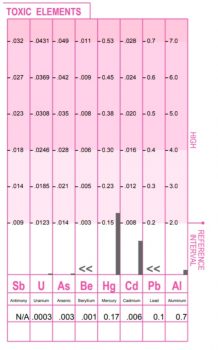 Extremely high calcium, or Calcium Shell, along with a loss of magnesium, couple those with a slightly elevated sodium and a loss of potassium.  The big takeaway here is the overt Copper Toxicity (biounavailable copper build up) at 6.0mg%.  Putting extreme stress on the body, the liver and of course, a zinc loss (so zinc deficiency) which can cause the body to sequester mercury and cadmium. 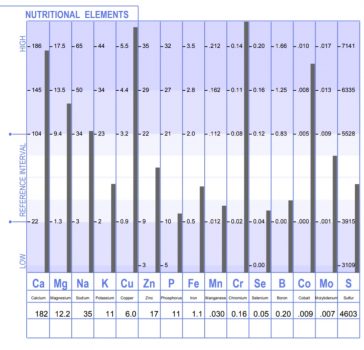 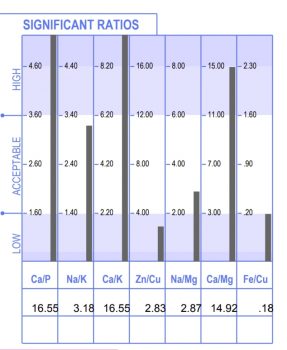 High tissue calcium levels decrease the permeability of cells and as well as lower the absorption of thyroxine (T4).  Not only that, but some symptoms that can appear with high tissue calcium are: depression, immobility (especially in the spine), arthritis,  kidney stones, weakness, insomnia, joint pain and stiffness, as well as severe constipation.  Overt Copper Toxicity can bring with it debilitating symptoms such as brain fog, insomnia, estrogen dominance, chronic fatigue and more.  Dealing with a Slow Oxidation rate that is coupled with a sluggish thyroid and adrenals is the most extreme case, so protocols can be in depth.  We started with Vykon Slow Oxidizer formula with some much needed add-ons to support what we were seeing on the testing including the above mentioned Calcium Shell and Copper Toxicity.  The Vykon Slow Ox formula is made specifically for those clients that are a Slow Ox Type 1 (as identified by Trace Elements).  We also added a binder (in this particular case she had some GI dysbiosis, so we opted for food grade diatomaceous earth), liver support, and a good probiotic.  Within the Vykon custom blend, I also made sure that the co-factors needed for implementing iodine were included as I had set my sights on including that at week 8 as well.  Lastly I put in a request for a full blood work panel including CMP, full iron and full thyroid to be reviewed at our mid-protocol follow-up.

In this particular case, a lot of time had passed; she was extremely busy at work and her health took a bit of a back seat, so I was not sure based on the timeline and supplementation support what we would see on a retest.  She had continued with a sporadic use supplements including probiotics, magnesium, sea salt, potassium foods/beverages and zinc.  Bloodwork had not been completed fully at this time and iodine did not get implemented in the first protocol following the October 2020 test.  Overall, her stress was still high; her symptoms had not changed much, energy still low, GI distress, estrogen dominance, braing fog, low iron, and she was tracking her thyroid nodules, which had not changed throughout this time.   At this point, she was still in Slow Oxidation with depleted thyroid and very depleted adrenal activity, so not much has changed with regards to the level of energy except her minerals had become lower across the board.  See points below for explanation on each graph.

We can see changes here with regards to the level of arsenic (higher), mercury (higher), cadmium (lower) and aluminum (lower).  Again, the mercury could be a constant exposure, but it could also be a continued lack of zinc.   When toxic elements move up on a retest, this can be cause for celebration due to the body detoxing the metal. 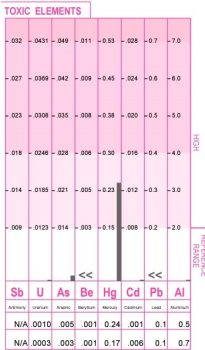 As you can see the shift in the body is quite clear, we have a reduction in all 4 macro minerals (Ca, Mg, Na, K).  The copper has come down, however, there are still a number of markers for hidden Copper Toxicity and given the loss pattern of zinc here, this means that the number is actually lower than 10mg%, which is extremely depleted. 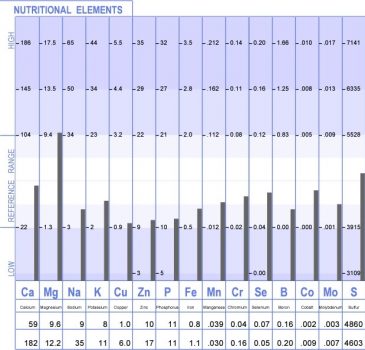 Ratios here; some are getting better and some worse.  Slow oxidation pattern is improving (Ca/P not so high), however, we have an exhaustive stage of stress (low Na/K), sluggish thyroid (high Ca/K), extremely depleted adrenals (low Na/Mg), with Zn/Cu, Ca/Mg and Fe/Cu improving and starting to come into balance. 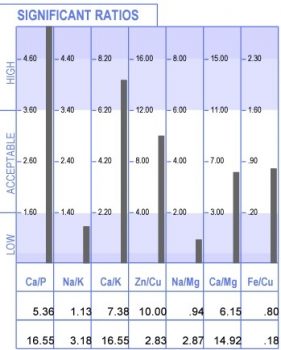 At this point, given the client was still extremely fatigued and not feeling like herself, she fully committed to the protocol.  She was ready to make big changes to ensure she felt better.  So for this next round of the protocol she committed to a retest in 4 months to ensure we would be on the right track and decided to go all in.  We went with another Custom powder blend including the Vykon Slow Oxidizer powder with add-ons for adrenal support, liver support, central nervous system support, detoxification support and antioxidant support.  We also included an potent adrenal glandular, a good probiotic, food grade diatomaceous earth, low dose lithium orotate, Lugol’s iodine and New Zealand Whey Protein isolate (to support amino acid levels and phosphorus).

After 4 months of fully committing and being on the suggested protocol, the results were astounding.  This client’s pattern moved from a Slow Ox 1 (depleted thyroid and adrenal function) to a Slow Ox 4 (increased thyroid and adrenal function) with 6/7 significant ratios being within range, and 5/7 presenting at almost ideal levels.  Her body had made a huge shift in a very short period of time and she was feeling the changes.  Her thyroid was being activated, she could feel that too, her TSH had increased slightly (which is common with the proper use of iodine) and the other levels were looking great.  See illustrations below.

You can see in this toxic elements chart it looks as though the body is still moving mercury (this could be a bit because of the deficiency we are still seeing in zinc), dumping arsenic (it is increasing), and now dumping aluminum.  The body’s shift into a stronger position with more balanced ratios is allowing it to deal with toxicities more efficiently. 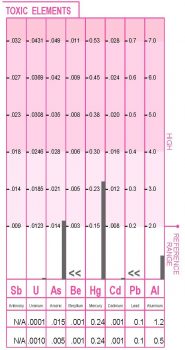 Amazing progress with the movement of the big 4 minerals (Ca, Mg, Na, K) and given the Slow Ox 4 pattern, the loss patterns are not always so easy to identify.  In this case with the use of proper minerals, as well as the implementation of iodine, there is need for supplementation but at much lower doses than prior for support. 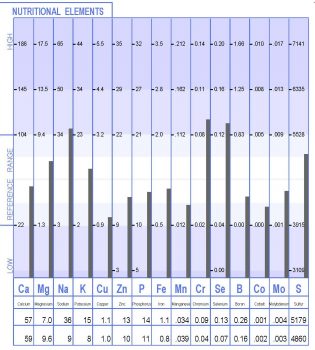 These are some of the best ratios I have seen to date, we have 5/7 ratios at almost optimal levels and within optimal ranges.  The Ca/P is still slightly elevated, but still moving in the right direction and the Zn/Cu slightly elevated, but within the reference range.  Thyroid and adrenals are in a great range with very balanced activity. 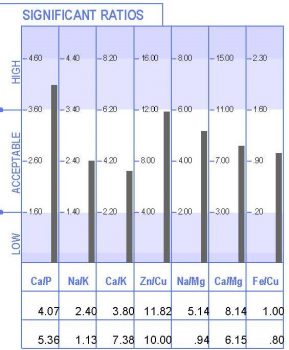 At this point we had a bloodwork follow up, her tT3/rT3 was still below 10, so we opted to keep using iodine at a low dose and track.  She was exhibiting a low Neutrophils to Lymphocytes so we added a potent hydrolyzed silver for any virus / chronic infections and are continuing with a new Vykon Custom powder blend of minerals, vitamins, and amino acids; including extra support for liver, antioxidants and detoxification, but all ingredients at lower doses than before.  She will continue using the New Zealand Whey protein isolate to support healthy phosphorus levels and protein in the diet.  Lastly, she will now be switching to the Vykon Humic:Fulvic:Zeolite Complex for mineral and binding support for the heavy metals we are still seeing.

Using HTMA can support what the body needs to thrive.  We can see exhibited from the above graphs that the body will make major shifts with the right level of supplement support, along with a high level of commitment and consistency from the client.  This commitment puts a client’s mindset into their healing journey and this is an important part to the progress we see.  In conclusion, in this particular example, this client has regular bowel movements with less GI distress, regained energy, erased braing fog, more optimal hormone and iron levels, and has changed the health of her thyroid.

Please be advised, this article was written for educational purposes only.  Any mention of protocols or products being utilized should not be implemented without the recommendation and supervision of a qualified health professional.