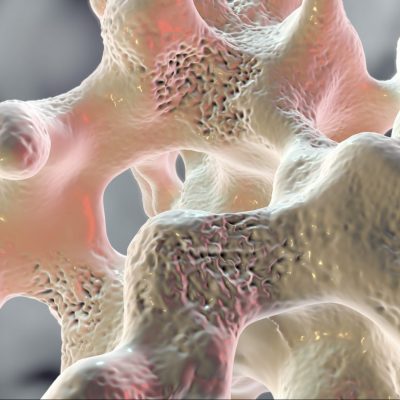 Osteoporosis is a disease that weakens bones to the point where they break easily—most often, bones in the hip, backbone (spine), and wrist.  Osteoporosis is called a “silent disease” because you may not notice any changes until a bone breaks.

In early 2021, I was contacted by a woman who had been diagnosed with Osteoporosis.  She was provided information with regards to supplementing with high levels of calcium, as well as strontium.  Over the course of the supplementation she had a follow-up bone scan which moved her from Osteoporosis into Osteopenia.  However, over the same course of time while things should have been getting better, they were sadly getting worse.  Her original symptoms were: extreme constipation, joint enlargement (calcification) especially in the hands, lack of mobility in her fingers, intolerance to exercise and chronic fatigue.  She was not feeling like herself anymore and wondered how mineral balance might help her situation and symptoms.  We had a long chat about mineral balance and she had a tough decision to make, because I was telling her the opposite of what the doctors were telling her.  The medical model unfortunately was not solving all the problems but having to change her thinking 180 degrees is a hard thing to do.  In the end she decided to move forward with HTMA to see how it might change things…….and I know now, she is glad she did.  This is her full case study.

First Round of HTMA Results – February 2021

First round results were in, identifying her as an extremely slow oxidizer, the fact that we are not really seeing any high level of toxic elements is common, the body has other things that are a priority and lacks the strength for any heavy metal detox, at this point (see Fig. 1).  Toxic elements are detrimental to the system, cause premature aging and can wreak havoc on the entire body.  At this point there may be metals deeply buried in the body, so the significance of these will most likely come in future testing, if applicable.   You can see below her minerals are out of balance (See Fig. 2) and when we look at the ratios (see Fig. 3) there is intense stress, as well as extremely sluggish adrenals (Na/Mg) and thyroid (Ca/K).

In this toxic elements chart, you can see there are no really high levels of toxic metals.  The body has other priorities at this point, metals may be deeply buried in tissues and it is common once the body starts operating better, you may see metals purged at that point. 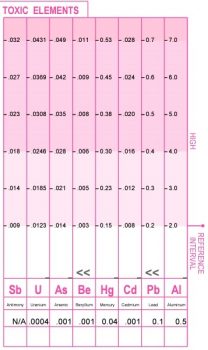 Extremely high calcium, or Calcium Shell, along with a loss of magnesium, couple those with a very depleted sodium and potassium.  Briefly as well noting that Fe is elevated and may point to a bacterial infection, and cobalt elevation relates to digestion and liver congestion. 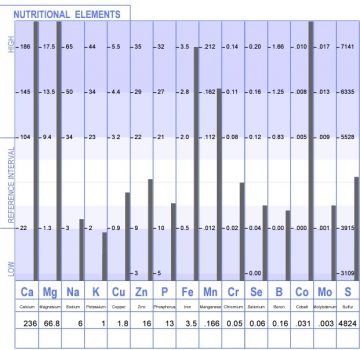 High tissue calcium levels decrease the permeability of cells and as well as lower the absorption of thyroxine.  Not only that but some symptoms that can appear when it is present are: depression, immobility (especially in the spine), arthritis,  kidney stones, weakness, insomnia, joint pain and stiffness, as well as osteoporosis.  Dealing with a Slow Oxidation rate that is coupled with a sluggish thyroid and adrenals is the most extreme case, so protocols can be in depth.  We started with Vykon Slow Ox which contains the B vitamins that are great for the Slow Oxidizer, as well as MK-7, B, Mg, Na, K, Se, enzymes and more.  We opted to add a separate liver support – Health Force Liver Rescue, which not only contains milk thistle, dandelion root and turmeric, but also chanca piedra (noted as the kidney stone breaker).  She didn’t have kidney stones, however, when we are dealing with high levels of Ca, this is a great support to all protocols.  This is also available in a tincture from Whole World Botanicals.  When someone is an extremely Slow Oxidizer, then loss patterns are easier to identify, those being Mg, K, Zn, B and Li.  Give this factor, we opted to utilize a small amount of Zn, along with a heaping tsp of Celtic sea salt / day and prepping for the iodine protocol.  We then added a binder to bind to mobilized toxins, the Vykon Liver Support Probiotic and an adrenal glandular.  This protocol when implementing mineral balance for the first time was started low and each product was titrated in slowly to ensure there were no reactions.  Given the time to titrate, her retest would be approximately 120 days later.

I was excited to do her review and correlate what was happening on the HTMA with current symptoms.  Based on the test alone there was still a ways to go, but some major movement in the level of Ca, Mg and Co (Fig. 2).  There were some great improvements within the significant ratios as well (Fig. 3), still in Slow oxidation but the levels were coming down nicely towards the mid range.  The stress ratio (Na/K) had come down slightly, but we still needed to do some major work on raising both of those individual mineral levels.  Thyroid ratio (Ca/K) was decreasing nicely as well, Zn/Cu increasing, could we have movement and potentially hidden Copper Toxicity?  Marginally increased Na/Mg and the Fe/Cu was just slightly higher.

So how did she feel??  Her hands were getting more mobile, she was having regular bowel movements, she was able to exercise 1-2 days per week and she had significantly more energy.  All good, it seems we were moving in the right direction.

In this toxic elements chart, you can see there really are marginal changes, nothing much to report.  This is common to see when the body has other issues that are priority (Calcium Shell). 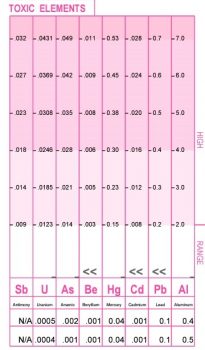 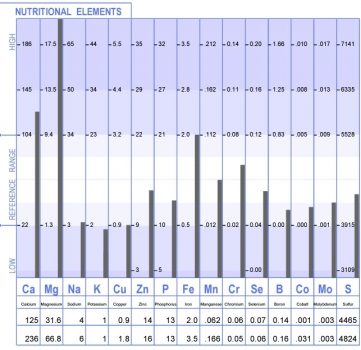 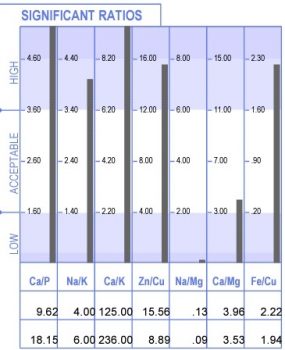 Based on the feedback and the progress, we didn’t change much about the protocol, continuing with the Slow Oxidizer powder with some extras, the same liver support, Vykon Liver Support Probiotic, adrenal glandular and our Lugol’s iodine (which significantly supports the body’s decalcification, detoxification and potassium retention).  Now that bowel movements were normalized, I knew we could do just a bit more, if the bowels are not moving, in any protocol, this is the first thing you need to address.

After the next 90 day protocol a retest was necessary to evaluate how the Ca was going to move and of course, how symptoms were going to change.  When you have someone with issues, such as this, the retests are critical to evaluate patterns and make changes to protocols.  Based on the test alone there was some incredible progress to note.  She had started to dump Hg (Fig. 1), had only a few markers of Hidden Copper Toxicity, her turn around in Na and increase in K (Fig. 2) was telling me the body was getting stronger and the adrenals (Na/Mg) made an incredible rebound on this test (Fig. 3).  Her thyroid (Ca/K) as well, was still continuing to decrease towards an ideal level (Fig. 3).

During her review she could not have been happier with how she was feeling.  Her hands were making great strides with no pain and the calcification in the joints was starting to decrease visually, she continued to have normal satisfying bowel movements daily, her energy was more than it had been in years and lastly she was back on the trampoline doing her full exercise.  I was thrilled to hear how the symptoms were reducing and she was starting to thrive.

In this toxic elements chart, you can see here that the client was starting to dump Hg, there might be more to come and more metals to come as well now that the body is operating at a higher level. 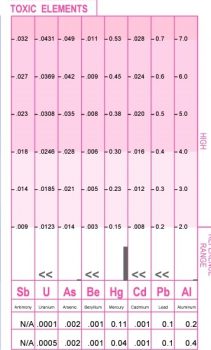 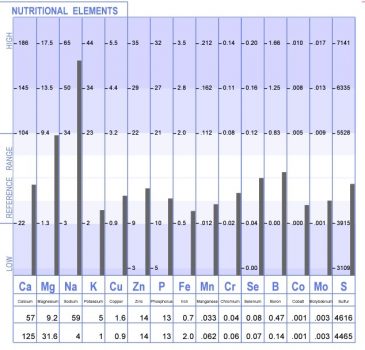 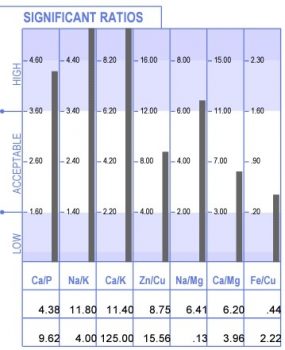 Now that this client has moved from a Slow Oxidizer Sub-type 1 (sluggish thyroid and adrenals) to a Slow Oxidizer Sub-type 2 (sluggish thyroid and overactive adrenals), we will no longer be using the adrenal glandular, but rather adding some Vitamin B5 into the Vykon Slow Ox mix.  We have added more calcium rich foods into the daily diet, to see how this will affect her Ca level over the 90 day period.  As things continue to improve, she still had 4/7 markers for iodine deficiency so we are continuing Lugol’s but at a very low dose, as it will decalcify.  The retest is next, so consider this case study TO BE CONTINUED………

Using HTMA can support what the body needs to thrive.  Changes and updates with regards to proper protocols is critical and as you can see from this particular example, energy can be regained and symptoms can be reduced, sometimes even erased, when you build and support the foundation of minerals.

Please be advised, this article was written for educational purposes only.  Any mention of protocols or products being utilized should not be implemented without the recommendation and supervision of a qualified health professional. 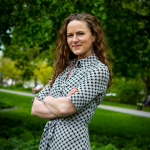